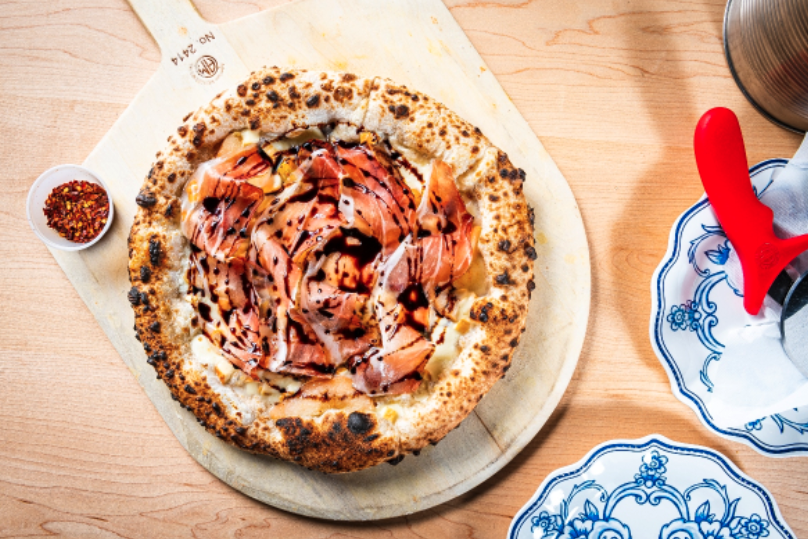 Stellina Pizzeria Is Opening at Capital One Center

Since Bisnonna Bakeshop‘s pop-up at Tysons Corner Center ended at the close of last year, Tysons has been without a counter doling out fresh Italian sweets. But eaters craving cannoli, millefoglie, and tiramisu won’t be bereft long. Today, restaurateur Antonio Matarazzo and chef Matteo Venini announced that they have signed a lease for a 4,100-square-foot space in Capital One Center that will be home to the fourth Stellina Pizzeria location, the second in Northern Virginia.

Besides a pastry counter, this extra-large Stellina, which fills two storefronts, will also be the commissary kitchen for the other locations. “Staffing is the toughest part of the job right now because we make everything from scratch,” says Matarazzo, a longtime Arlington resident. “If one person doesn’t show up, it doesn’t happen.” But this commissary will streamline operations so everything from pizza dough to fresh pasta to arancini will be made in one place.

Construction will begin next month on the Tysons location, which will open onto a large patio shared with another restaurant. Matarazzo says that diners can sip and stroll with drinks from the bar while they take in live music, or sit down at one of the 35 outdoor seats. Of course, they are also in close proximity to Capital One Hall and its concerts, comedy, and theater.

The menu in Tysons will be similar to other Stellina locations, meaning an emphasis on light, easy-to-eat neo-Neapolitan pizzas. Fresh pasta, panini, and salads round out the menu. A coffee counter serving the aforementioned pastries will also pour Filicori Zecchini Italian java.

Matarazzo says that he and Venini are shooting to open in November or December.